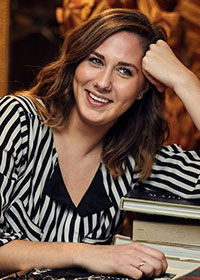 Mailey Shimon spent January and February of 2016 in New York as Costume Design Production Assistant on the stage adaption of the movie, A Bronx Tale. The production was co-directed by Robert De Niro and Jerry Zaks, and opened February 14, 2016 at the Paper Mill Playhouse in New Jersey.

Shimon, who graduated from Mason with a BFA in Theater in 2016, said she’d been eyeing the opportunity to work with the play’s costumer, six-time Tony Award winner William Ivey Long, since she was a sophomore. Internships with Long’s studios are competitive and are usually given to graduate students with more experience. Shimon’s mentor, Howard Vincent Kurtz, a theater professor at George Mason, mentioned her during a meeting he had with Long three years ago. Long, in turn, recommended that she apply for the internship. Kurtz wrote a recommendation letter for Shimon and helped her pull together an application, which she submitted in 2014 to Donald Sanders of William Ivey Long Studios.

“It was during the summer of 2015 I took on the vigorous campaign on Mailey’s behalf to get her this internship during her senior year,” Kurtz said. “I called Donald directly to talk through project and time slots … Bronx Tale became the best fit.” Shimon’s strong resume—costume, hair and makeup work on several Mason productions, and two summers as a supervisor and costume design assistant at Berkshire Theatre Festival—helped her land the gig. “Mailey has had the passion and determination to be a costume designer from the very day she arrived at Mason,” Kurtz said. “We are all so pleased that Mailey is able to have this opportunity to work with one of Broadway’s greatest designers.” Shimon also worked  on the production’s “show bible,” a breakdown of all the characters’ costumes and where items were purchased, so that if something happens to a costume during the show, staff know how it can be replaced or repaired.

Shimon recently worked as a Costume Design Production Assistant on The Greatest Showman, a feature film starring Hugh Jackman as P. T. Barnum due to come out in 2017.

”Shimon’s next project is Disaster, a show in production at the Nederland Theater on Broadway.