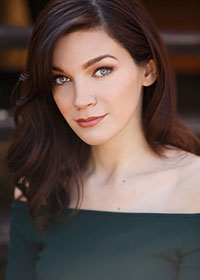 Sara Dawn Taylor-Torres is currently pursuing a career in Atlanta GA, one of the two biggest markets in the US for film and television production today. She arrived in Atlanta in 2014 and within one year she went from being an extra, to stand in, to photo-double, to off-camera reader for the Vampire Diaries stars, to getting signed with one of the top agencies in Atlanta. She credits her success to her hard work and willingness to put herself “out there,” as well as to all the support she received from her professors back home at Mason!

Sara’s first extra job was on Insurgent and she got to be one of five people in a room with Kate Winslet. Instead of being terribly star-struck, she was inspired. Here was an incredible actress putting every ounce of sweat and focus into her work and she wanted to be a part of that. So, she made connections through extra work, some beneficial, some not. The industry can be very hit or miss. Knowing she couldn't stay in extra work forever, she managed to get a featured role with Michael Keaton and he was also incredibly inspiring to watch. He asked her name and graciously gave her his acting notes as a gift. She then moved up to stand-in work for Kimberly Williams Paisley (Alvin & the Chipmunks 4) and Michelle Monaghan (Sleepless Nights). She kept on submitting herself for stand-in work while working on numerous independent films in Atlanta to keep her acting on point. Working on indies is a must when starting out and she managed to get cast in an indie film that fell under the jurisdiction of the Screen Actors Guild (SAG), making her SAG-eligible, meaning she could be considered for even more roles.

Now, she is gearing up for her next indie feature, The Bystander Effect, filming in Pittsburgh in June 2016. She truly believes that it is about the journey and challenging yourself and making sure that even when you fall or there is a period of time where things seem slow, that you always give yourself the courage to keep fighting.