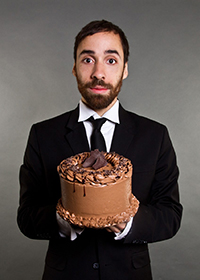 Michael Burgos is an internationally award-winning and acclaimed writer and performer. He holds a Diplôme from École Philippe Gaulier and a B.A. in Theater from George Mason University, where he received the Chris Parsons Acting Award, the Greenspring Players Scholarship, and the Outstanding Achievement in the Major Award. Michael also trained extensively and worked professionally with master teacher Dody DiSanto, a teaching protégé of the late Jacques Lecoq. Additionally, Michael is a graduate of Washington Improv Theater’s Training Program and has studied at the Upright Citizens Brigade Theatre in New York. While at George Mason University, he was one of the founding members of the university’s improv troupe, the Mason Improv Association. He has taught theater with Acting For Young People since 2010 and has written and directed over twenty short plays for children. Michael also holds a B.M. from Berklee College of Music and has toured with Bruce Springsteen & The E Street Band.

Michael has been performing his one-man show The Eulogy at fringe festivals across the U.S. and abroad to much acclaim, and will bring the show home to Mason for a performance on November 3, 2017.