Guest Artist Series: Creating Anti-Racist Theater is the professional guest artist series of the School of Theater, offering students, faculty, staff, and members of the theatrical community the opportunity to discuss and explore ideas and practices around building inclusive spaces and practices in the global theater industry.

Knowing that it is critical for students to engage with their industry while studying at Mason, Djola Branner, Director of the School of Theater, decided to create opportunities for exactly that with this program.

Guests for Fall 2023 will also be announced here at a later date.

Find out More and Register 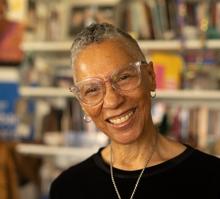 A 2022 Winner of Yale's Windham Campbell Prize in Drama, Sharon Bridgforth is 2020-2023 Playwrights’ Center Core Member, a 2022-2023 McKnight National Fellow, and a New Dramatists alum. She has received support from The Doris Duke Performing Artist Award, Creative Capital, MAP Fund, and the National Performance Network. A MAP Fund Scaffolding for Practicing Artists Coach, her work is featured in Volume 110, No. 4, Winter 2022 of The Yale Review, Teaching Black: The Craft of Teaching on Black Life and Literature, Mouths of Rain an Anthology of Black Lesbian Thought, Feminist Studies Vol 48  Number 1, honoring 40 years of This Bridge Called by Back and But Some of Us Are Brave! Sharon's new book, bull-jean & dem/dey back (53rd State Press 10/2022) features two performance/novels that will be produced by Pillsbury House + Theatre in Minneapolis  2022/2023. Sharon's dat Black Mermaid Man Lady/The Show is streaming on the Twin Cities PBS platform (7/10/21. Episode #131). She has served as a dramaturg for: the Urban Bush Women Choreographic Center Initiative’s Choreographic Fellowship program and was writer, dramaturg, and voice over performer for Ananya Chatterjea Dance Theatre's, Dastak: I Wish You Me. More at: www.sharonbridgforth.com. 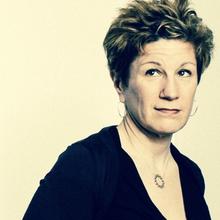 Lisa Kron has been creating and performing theater since moving to New York City from Michigan in 1984 and finding a home at the WOW Cafe, a lesbian theater collective in the center of that era’s rich East Village performance scene. She’s best known for writing the book and lyrics for the musical Fun Home, with music by composer Jeanine Tesori, which won five 2015 Tony awards, including Best Book, Score, and Musical, and was a finalist for the Pulitzer Prize.  Lisa’s other plays include In The Wake, Well, and the Obie Award-winning 2.5 Minute Ride.  As an actor, she received a Tony nomination for her performance in Well and a Lortel Award for her turn in the Foundry Theater’s acclaimed production of Good Person of Szechuan.  She is the recipient of Guggenheim, Sundance, and MacDowell fellowships, a Doris Duke Performing Artists Award, a Cal Arts/Alpert Award, a Helen Merrill Award, the Kleban Prize for libretto writing, and grants from Creative Capital and NYFA.  Lisa is a founding member of the OBIE- and Bessie-Award-winning collaborative theater company The Five Lesbian Brothers.  She’s served as an elected member of the National Council of the Dramatists Guild of America since 2010.  Lisa is VERY proud to be part of a theater-based giving circle called Save Our States that raises money as a community every election cycle to support The States Project, an organization working successfully to shift the balance of power in state legislatures, where it matters most!! 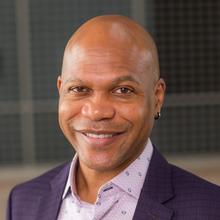 E. Patrick Johnson is Dean of the School of Communication and Annenberg University Professor at Northwestern University. He is a 2020 inductee into the American Academy of Arts and Sciences. Johnson is a prolific performer/scholar, and an inspiring teacher, whose research and artistry has greatly impacted African American studies, Performance Studies, Gender and Sexuality studies. He is the author of Appropriating Blackness: Performance and the Politics of Authenticity (2003); Sweet Tea: Black Gay Men of the South—An Oral History (2008); Black. Queer. Southern. Women.—An Oral History (2018); and Honeypot: Black Southern Women Who Love Women (2019), in addition to several edited and co-edited collections, essays, and plays. Johnson’s written and performance work dovetail intimately. His staged reading, “Pouring Tea: Black Gay Men of the South Tell Their Tales,” has toured over 100 college campuses since 2006. The full-length stage play, Sweet Tea—The Play, premiered in Chicago, toured across eight other cities, and to the National Black Theater Festival. Johnson is also among the subjects and co-executive producer of the film, Making Sweet Tea, which has received several awards, including Best LGBTQ Film at the San Diego Film Festival, Best Documentary Audience at the Out on Film Festival, and the Silver Image Award from the Association of American Retired Persons (AARP) for Positive Representation of LGBTQ People over Fifty at the Chicago Reeling LGBTQ Film Festival. More at: www.epatrickjohnson.com