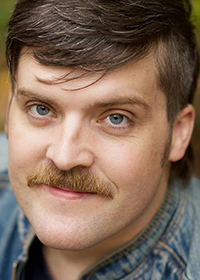 After graduating from GMU, I moved to Chicago and pursued improv comedy. After a few years I took time off from performing and instead pursued seasonal work opportunities that included working as a Commercial Fisherman in Kodiak, Alaska and as a Dairy Farm worker in New Zealand.

Since moving to NYC and returning to freelance work as an actor, my mustache and I have been featured in Short Films, Commercials, Music videos, Plays, Musicals and TV shows.