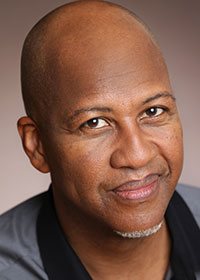 Djola Branner (he/him) is an interdisciplinary artist/educator who combines movement, sound, and light to give voice to individuals historically absent from the stage. Co-founder of the award-winning performance group Pomo Afro Homos, he toured nationally and internationally with their shows Fierce Love: Stories from Black Gay Life and Dark Fruit and subsequently performed in regional theaters across the country. He has created such original productions as The House that Crack Built, cover (a Samuel French finalist), oranges & honey, Mighty Real: A Tribute to Sylvester, Sweet Sadie, and sash & trim.

Branner’s seminal work has been supported by Creative Capital, the Jerome, McKnight, and Bush Foundations, and published in multiple anthologies, including Black Gay Genius, In the Life, Monologues for Actors of Color, Staging Gay Lives and Colored Contradictions. His first book of collected plays, sash & trim and other plays, was a finalist for the Lambda Literary Award in 2014.

Branner has taught dance, acting, and dramatic writing for more than thirty years in community and academic settings, including City College of San Francisco, Stanford University, University of Minnesota, Macalester College, American Musical & Dramatic Academy, Amherst College, Brown University and Hampshire College where he was a full professor of theater.

Branner is a member of the Dramatists’ Guild.